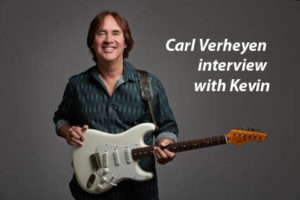 In June 2018 I was in Los Angeles and caught up with the amazing guitarist Carl Verheyen (pronounced Ver-high-in) at Village Recorders where he was working on and producing an album for Chilean singer and guitarist Felipe Tarantino.  Carl, has been the number one session guitarist in Los Angeles for a long time, is also a member of the band Supertramp, and runs his own band, the Carl Verheyen Band, which he is spending more time with now.

To see the full interview click on this link:Carl Verheyen Interview